Good evening and thank you all for coming this evening. On behalf of lovely and heroic Alice, along with Drew and Madeline Masterson, let me say how very pleased we are that you’ve joined us to celebrate Drew and Ginny’s marriage, and we welcome you all.

It’s my honor to offer the evening’s first toast, followed by a prayer of thanksgiving to whet our appetites.

Among many immutable laws of nature is this: Chuck in front of a crowd + making remarks = high probability a grown man will cry. In that event, my apologies in advance.

So, this is the fourth of my children’s weddings. Providentially, I was prevented from actually attending the first in 2009. Eight years on, I don’t often look too far ahead with unquestionable certainty. And while cell phone video and Skype brought Chip’s wedding streaming through a rehab hospital monitor – the next best thing to being there — it’s really sweet for me to be right here with you all in spirit and body, appetite at the ready.

When I first met Drew, he struck me as a thoughtful, well-spoken, somewhat quiet guy. On a rainy afternoon I arrived at Christie Danner’s birthday shindig, and as I rolled down my van’s ramp, Drew met me, umbrella extended, and walked alongside me until we were both under cover. In his off-hand, he toted another fold-up ramp that I asked him to unfold and position to permit me to roll up and into the main celebration area. And, he helped push me up the much steeper than “wheelchair-manufacturer-recommended incline.” His warmth, friendliness and service were front and center. Meeting several of Ginny’s younger siblings that day, to my eye and ear Drew registered interest in and spoke genuinely and easily with Calvin, Gracie, Gifford and Allie. We had an enjoyable conversation-filled dinner later on at the nearby Lost Dog Saloon, before parting.

I can’t recall the particular order but in time Drew would meet the other siblings and in-laws: Emily and husband Jonatan, Allie’s husband Kenneth, and Chip and his wife, Ellie. All warmed to Drew, and in time he faced the entire mob en masse, living to tell the tale, even returning regularly through the months. It wasn’t long before he seemed at ease, working the Heidel crowd warmly — both young and old.

I learned more about Drew — growing up on the ranch, his family, his time at Davidson, the Fellows Program, and the Christian Study Center community (with which I intersected when bumbling my way through college). One evening, I overheard Drew describing the Christian Study Center model as ” . . . full-orbed — concerned for the whole individual, and characterized by hospitality, honest inquiry, spiritual formation and intellectual rigor.” That description fascinated me. His and Ginny’s friendship grew closer around experiences and interests both in common, and uncommon. They both enjoyed film and that medium’s cultural impact. And under Drew’s influence, Ginny was persuaded to don fly fisherman’s waders before catching a real trout (a brookie, I believe). I never saw that coming — but there is photographic evidence. Word is, her fly casting technique is spot on. 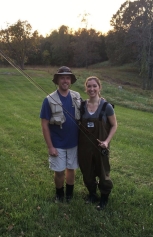 In time Drew and I would speak about his continued affection for Ginny and his interest in marrying her. I’ve had some experience evaluating daughter-suitors. Early on, one or two of those exploratory discussions went a bit rough — no doubt due to my youthful, merely book-learned zeal and inexperience. But when Drew and I intersected over a good steak dinner, we spoke candidly, openly, and warmly, and it was the case that his interest and intentions were in line with my paternal expectations. Our conversation then ventured in a number of directions — all at least semi-serious topics, even the smaller print “In sickness, and in health” possibilities. I appreciated those exchanges. His respect and deference meant a lot to me then, and it was plain to see his interest in and treatment of Ginny was that of a servant, not a self-server.

It is often true that you can judge a man by the company he keeps. You can also judge a man by family he comes from. Recognizing limitations of human agency, but that God ordinarily achieves His ends through means — which are sometimes relationships — as Alice and I came to know Drew and Madeline better, along with Blake, Kendall, and many of you here this evening, including the Uncles, we appreciated Drew even more.

When I first met Ginny, she was very close to her mother (pause for a rim shot and scattered laughter) . . . . We were soon very good friends. In time her creative, imaginative, artistic, literary, dutiful, agrarian, tomato-loving, chicken raising / chasing, romantic, great laughing, scholastic, dramatic, lexiconic, multi-accent-impersonating, critical thinking, museum-loving, determined, Singin’ In The Rain and White Christmas-loving, sociable self manifested. Having grown up in a Christian family, Ginny moved onto her university experience, and later the work-a-day world, and many of her presuppositions were put to the test only to emerge tempered, not torn to pieces. And, through the years, her gifts were honed. Main stage plays, illustrations, blogging, song writing, singing, handwriting, culinaria, and travel experiences, during one of which Ginny was a caregiver to a disabled but accomplished American expat play write and producer.

There is a great deal to like about Ginny. Though it may not be plain at first, all of Ginny’s qualities have somehow synthesized into an eager, not overly complicated, ministry-mindedness. When they were in college together, Ginny and her sister Emily regularly hosted informal dinners in their college apartment. Frequently, first-timers attended, and were drawn in to the dynamics of the evening – taking coats and tossing them in a back room, helping to serve appetizers, putting finishing touches on the dish they brought, perhaps not having brought a dish, they pitched in and dressed the salad. Everyone, it seemed, engaged in some pre-meal activity. Then came the meal – conversation was kindled, common bonds were discovered, differences were explored, and laughter rolled through the room. Though there was no formal agenda, not infrequently a presentation was made that proved entertaining and culturally broadening — like the time two drop-in transfer students from Holland taught the group to sing “Head, Shoulders, Knees and Toes” in Dutch. Before long, all were acquainted and a fellowship was formed.

As Ginny related this to me, she told me about a song she likes by Patty Griffin, which I’d like to sing for you now . . . .

Kidding. But Ginny did think a line in that song was fitting:

And we’ll grow kindness in our hearts for all the strangers among us, till there are no strangers anymore.

I’m probably taking license here, but these lyrics seem to illustrate the end-game of hospitality – kindness that God grows in our hearts, extended to those around us who (we pray) will be brought into that vast number of saints — no longer strangers, no longer alienated from God.

We may have much or little in common with those we meet. Either way, by God’s grace, our mercy, charity and commitment to community can be a powerful force. Those whose paths we cross and to whom we grow closer should know without doubt they are not alone – and they have been cared for.

Drew and Ginny, I believe you get that, and I love so many of the qualities and perspectives you share, and your commitment to live together in light of them. You’ll be a great team.

So, join me now and all raise your glass.

Drew, I appreciate your manner, convictions, respect and friendship. And I am grateful to the Lord for his work in your life and to have you as my son in law. I trust and believe you will lead and care for Ginny tenderly, taking as your model Jesus Christ who gave himself up for His bride, the Church. Ephesians 5:25-32

Ginny, I love you and am delighted for you to marry Drew. I have no doubt you will adorn him wonderfully. Ephesians 5:22-24

To Drew and Ginny! God bless you both, and Skål!

And now please join me as I pray.

Gracious Father, Christ the Son and Holy Spirit, we praise you, and we thank you for this gathering, for our celebrants, Drew and Ginny, for their marriage, and for Your working as four parents and loved ones in two separate families, now solidly connected, have prayed over the years for such an outcome as this, an evening like this.

We ask You to bless Drew and Ginny as they begin their life together. Bless and deepen their love for You and one another. Give them every grace they will need. Establish them in their present and future callings.

We thank you for this meal, for those who prepared it, and for the venue in which we can enjoy it. Would you grant us nourishment, good conversation, and a joyful celebration now?

For we ask in Christ’s name — Amen.

Chuck Heidel here. Father of eight, married to lovely heroic Alice over 30 years. I'm a former midlife recreational cyclist, who was hit by a motorist while out riding in August 2009. Further validating Sir Isaac Newton's notions, the score that day was: Cars: 1. Bikes: 0, and I became a C7 tetraplegic, paralyzed from the mid-chest down. Author of WheeledWords: wheeledwords@wordpress.com. View more posts

This site uses Akismet to reduce spam. Learn how your comment data is processed.